What is the Emergency Bandage?

Home » Articles » What is the Emergency Bandage? 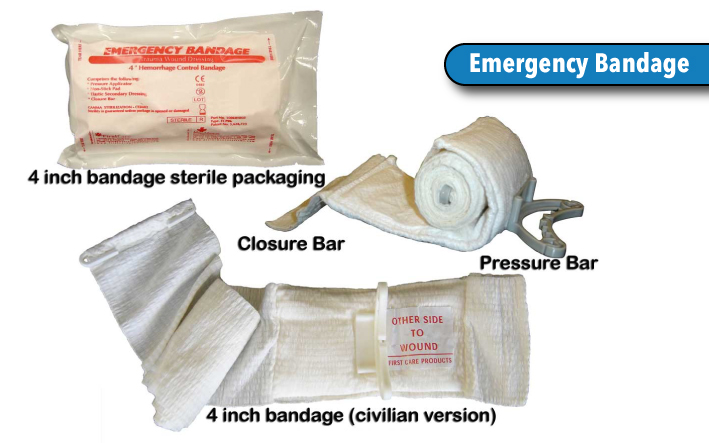 The emergency bandage, a.k.a the Israeli bandage, is a multi-purpose bandage that is used to treat heavy and potentially life threatening bleeding. Originally developed in the Israeli military, this bandage has grown in popularity world wide due to its versatility and easy to use design.

This elasticized bandage comes with a non-adhesive pad sewn in the fabric and a pressure bar. Once the pad is applied to the wound, the bandage is wrapped around the limb once, and is then inserted through the pressure bar and wound back in the reverse direction to apply sufficient pressure to the wound. Once the wound is wrapped, the wrap is tucked in using the closure bar to make sure the bandage does not shift. The bandage also has a sleeve to make self application easier.

Because the pad that is applied to the wound is non-adhesive, it makes changing and reapplying bandages easier as the wound is not reopened. This bandage can also act as a tourniquet and restrict blood flow to prevent further bleeding. And if wrapped correctly, this bandage can be used a as a sling to keep your arm still and elevated.

This is a bandage that we hope is not used often, but we are glad to have it. The versatility of the emergency bandage makes it essential to first responders and first aiders everywhere.